A different set of siblings than yesterday’s post but still playing.  These two are later in the fall up the river below the viewing platform near the intake to the spewing channel. In this case they are tired of catching and eating the salmon that are here to spawn and taking a break to play fight. It was not serious because there are so many salmon and we had watched these two filling up on salmon for over an hour so no need to fight over the best fishing spot. The abundance of salmon is shown in the fact that the bears in the Glendale River are not scared nor do they shown open wounds as the bears from many of the rivers in Northern BC and Alaska. 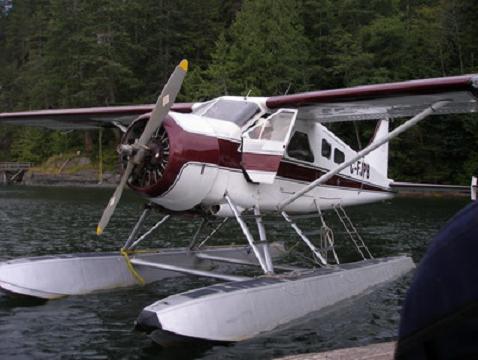 On your afternoon flight to the lodge your plane leaves Campbell River about 3:00. Somedays earlier if all the guests are early or possibly later because of weather (that is rare.). The number of guests determine the size of plane: six or eight gets you the de Havilland Beaver or Twin Otter while four or less and you have the Cessna shown in this photo. The forty-five minute flight is over some amazing scenery so have your camera ready.