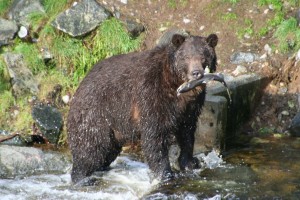 The photo of this large male grizzly bear was taken on October 10 that is close to the last day of Grizzly Bear Lodges viewing season.  It is interesting for the guides who have the pleasure of spending their summers with the bears to see how they change over the viewing season of late May through to mid October. British Columbia Ministry of Water, Land and Air Protection states: “In British Columbia, spring weights of adult Grizzly Bears
average around 220 kg (480 lb.) for males and 130 kg (290 lb.) for females. Average fall weights are about 30 to 40 percent more.” This bear would be larger than the average.

The grizzly bear river tours start in the estuary of the Glendale River. There are many different channels that could be used at low tide but only one or two that will get you up the river as the tide rises. In this case we are in the channel we need to use but the bears are in another but as the tide rises and the channels merge we move much closer. Again patience is the key when viewing wildlife.