The “Doing?” is because we do not know what they were doing. It was mid-September when most of the bears are up the river after the salmon and we had already been up to the viewing stands saw some bears. We had come back to the dock to have lunch and had time so we took the skiff up the Glendale River.  As the tide rose we came across Bella, her two cubs and the four-year-old siblings that are frequently in the area. They were in shallow water and as the tide came in they just stayed there and eventually swam to the far shore. No idea why and we had never seen this behaviour in the past.

For The Birds Pt4

Here are a few more common birds in the estuary and Knight Inlet area.  The Merganser, Common Loon and Surf Scooter.  The Surf Scooter often arrive in mid September in large numbers.  The male’s are quite striking.  The cruise the rocky cliffs of Knight Inlet eating large numbers of mussels. 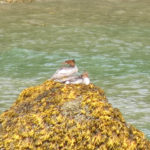 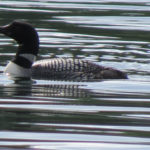 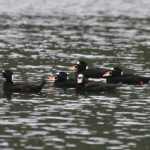