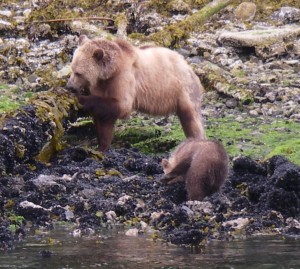 This photo was taken on July 12 meaning that this grizzly bear cub was five months old and is already rolling rocks on the beach. Grizzly bear cubs will nurse for up to three years their mother’s milk being more than 30% fat. Depending on when a grizzly mother bear wants to wean her cubs, a decision often made when she decides it’s time to mate again, she will keep producing milk for up to three years. However, grizzly cubs begin eating solid food from an early age and can very quickly become not dependent on mama’s milk. Also notice the hind leg of the mother grizzly is almost furless likely a result of rubbing in the den. It fur did grow back over the summer. 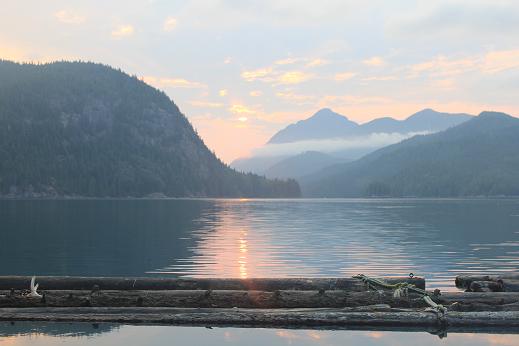 The morning view across the bay in front of the Lodge. Guest are called between 6:30 and 7:00 for an 8:00 or 8:30 departure depending on the time of the season. A good breakfast is on the table and most important fresh coffee or tea. This photo shows the tail end of a beautiful sunrise over calm waters.