This appears to be an awkward pose, with one paw out straight, for a grizzly bear eating a salmon. This is one of the few bears that we have seen over the years that were injured in a fight. The front paw could not bare weight but this bear became an excellent fisher and was able to catch salmon and fatten for the winters denning. When last viewed in October this grizzly appeared to have put on enough fat to survive hibernation but next year will tell the story if it is back at the river. 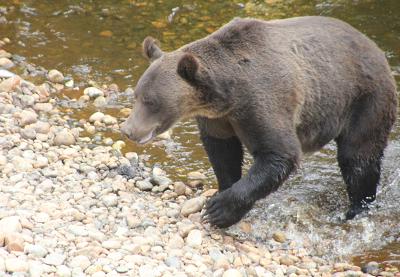 The viewing stand we use in the fall is located on the Glendale River and the grizzlies we view use the river as their highway as well as their larder. This good sized male grizzly came down the river very close to our platform and fished for salmon for the for more than half and hour before continuing down river. As I have stated before in the blog it is good to have the big bears have a short visit because they tend to scare other bears.