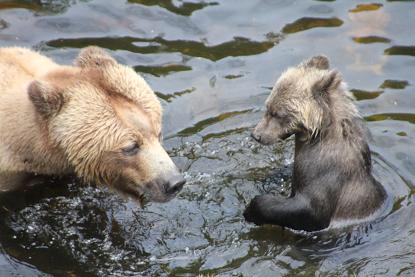 This grizzly bear mother had her paws full this summer as she had three cubs under her care. It was necessary to obtain enough food for herself and to be able to nurse the cubs. As the season progressed and the salmon came into the river in late August it became a little easier as the cubs were able to eat the salmon she provided and even to scavenge a few of the dead salmon along the shore. However as all “youngsters” with to much free time they want to play and this may not sit well with the parents as tomorrow’s post will show.

A grizzly bear’s normal claw length is 3 to 4 inches long; it is curved and the sharp claws helps it to dig for its food.  In early spring the bears use these claws to dig up the root bulb of the skunk cabbage, one of their favourite foods.  As the season progresses the claws allow grizzlies to get a good hold on the beach rock they turn over in search of crab, clams, amphipods and other tiny invertebrates. Claws are also used to scrape mussels and barnacles off the beach logs and rocks.  And as this photo, by UK’s Janis Worsley, shows the claws permit the bears to hold the salmon in position while also opening the belly to expose the fat rich eggs. Views such as this are common in the fall as viewing takes place from the stands on Knight Inlet’s Glendale River.  The stands overlook the spawning channel and tens of thousands of pink salmon that come to spawn.  It is a grizzly bear buffet and the main and only course is salmon.