Today’s posting is the opposite of yesterdays.  We were still going up the river but these grizzly bears were coming down river. It was a high tide and we were about as far up the river as we were able to go in the skiff. We were hugging one side of the river when the mother and cub came around the corner and passed on the other bank about fifteen meters (yards) away. Over a period of several weeks last summer we viewed mother grizzlies and their cubs on a daily basis as we all moved up and down the river with the tide.

A Turkey Vulture – North BC Coast? 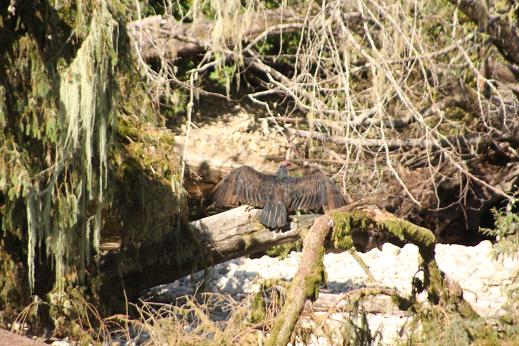 Yes this is a turkey vulture and it is a little out of place. They breed regularly on eastern and western Vancouver Island, the Gulf Islands and the southwestern mainland coast. In September and early October, large numbers congregate on southern Vancouver Island; kettles of several hundred vultures can be seen at Sooke, Beechey Head and Rocky Point. It is possible that the entire coastal population stages there before flying southward across the Strait of Juan de Fuca. This photo was taken on
August 25, 2015 so this bird should be heading to southern Vancouver Island about 400 kilometers (250 miles) distance. Instead it is sunning itself near the grizzly bear viewing platform we use on Knight Inlet’s Glendale River.