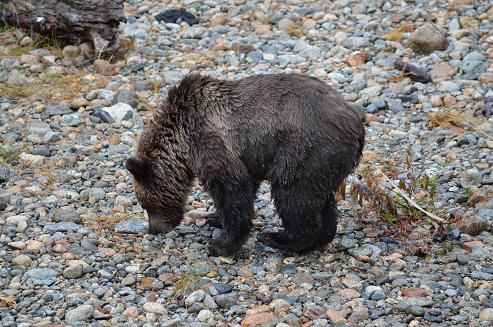 From Wikipedia, the free encyclopedia:  “Scenthounds as a group can smell one- to ten-million times more acutely than a human, and Bloodhounds, which have the keenest sense of smell of any dogs,[citation needed] have noses ten- to one-hundred-million times more sensitive than a human’s. They were bred for the specific purpose of tracking humans, and can detect a scent trail a few days old. The second-most-sensitive nose is possessed by the Basset Hound, which was bred to track and hunt rabbits and other small animals.
Bears, such as the Silvertip Grizzly found in parts of North America, have a sense of smell seven times stronger than that of the bloodhound, essential for locating food underground. Using their elongated claws, bears dig deep trenches in search of burrowing animals and nests as well as roots, bulbs, and insects. Bears can detect the scent of food from up to 18 miles away; because of their immense size, they often scavenge new kills, driving away the predators (including packs of wolves and human hunters) in the process.”

Even if the above statement is wrong by a thousand times a grizzlies sense of smell is amazing. This bear was checking on a grizzly that had passed an hour earlier but I have also seen them walk along a river in the fall and dig up salmon eggs. Often the river water level will drop exposing gravel bars were salmon had laid their eggs only to be dug up by grizzlies. 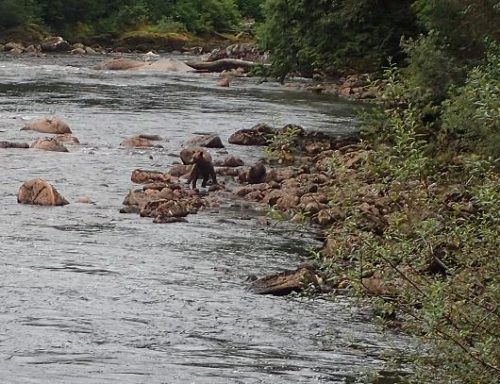 .. this mother grizzly bear with here first year cub appeared about one hundred meters (yards) down river. With a signal from Rick we were moved…