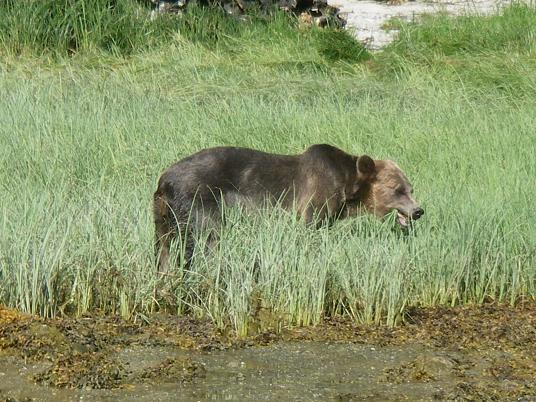 “Bears are omnivores that have relatively unspecialized digestive systems similar to those of carnivores. The primary difference is that bears have an elongated digestive tract, an adaptation that allows bears more efficient digestion of vegetation than other carnivores (Herrero 1985). Unlike ruminants, bears do not have a cecum and can only poorly digest the structural components of plants (Mealey 1975). To compensate for inefficient digestion of cellulose, bears maximize the quality of vegetal food items ingested, typically foraging for plants in phenological stages of highest nutrient availability and digestibility (Herrero 1985).” From Yellowstone
National Park website. Its fun to quote sites that give scientific facts for: – grizzlies eat anything and in the spring sedge grass is consumed in great amounts because they are not cows and have a hard time digesting the high protein sedge grass. But it is still strange seeing such a large animal with a fierce reputation eating grass. 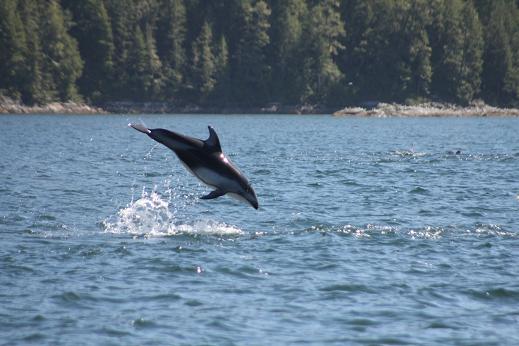 This is a Pacific White Sided Dolphin or “Lag” for short as it is a much easier name to use over a marine radio. These dolphins travel in groups between 20 to 100 but, on occasion, reach numbers of up to approximately 3,000. If you only see a couple, you might want to keep a look out, there are usually more not too far off.  Lags travel quickly reaching speeds up to 25 knots (almost 30 mph or 47 kph). They are very acrobatic and their frequent airborne flips and leaps can reach extreme heights.