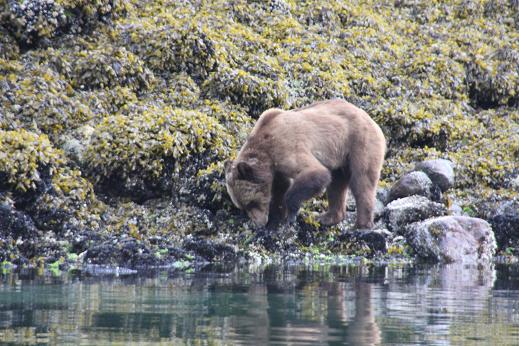 Grizzly bears start to appear on the beaches to turnover rocks in late May. This inter-tidal zone “food” is high in protein and is made up of crab, clams, barnacles, amphipods and other tiny invertebrates. The “beach food” is important because plant food is relatively scarce during spring and bears will continue to loose weight until well into June. Plant foods make up the majority of a bear’s diet (sometimes, as much as 90%) until the salmon arrive in the rivers in late August.

Many of the lodges guests have an interest in birds and ore often better at identifying the great variety of water fowl than their guide. The next three posting will provide photos of some of those more easily photographed. The great blue heron as a common sight in the coastal water of British Columbia. There is normally a heron on the small breakwater in front of the lodge the morning as well as along the shores on all the tours. This photo was taken on the Glendale River while watching the grizzly bears. The cedar waxwing started to appear around the lodge several years ago as were are in their summer or breeding range.