Home > Grizzly Bear and Wildlife Tour Blog > Grizzly Watching > What is the grizzly watching? 2 of 2 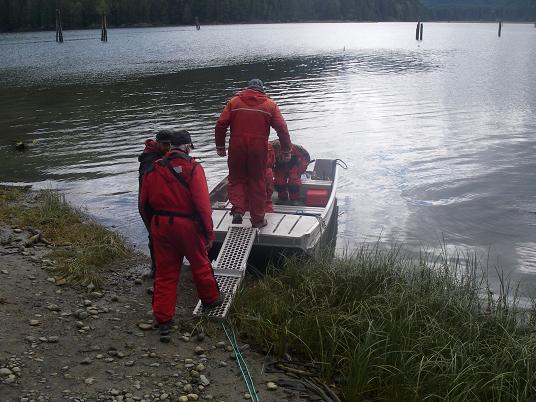 We are loading the skiff to return to a float for our picnic lunch after a morning on Knight Inlet’s Glendale River viewing platform. The grizzly of yesterday’s post was further along the beach and yes we were safe even though I was taking photo’s I did have bear spray at hand. Note it was a day with five guests as there were two boats and guides as we only allow four per boat. Even if we ignored the bear or it was closer the key is that we were a large group (seven) and bear would leave, as it had no reason to come closer. We were not preventing it from feeding nor did it have a cub. 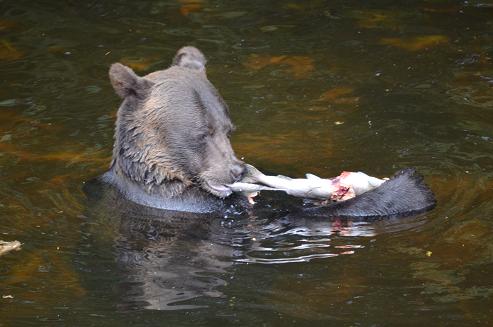 From Wikipedia: “Flaying, also known colloquially as skinning, is the removal of skin from the body. Generally, an attempt is made to keep the removed portion of skin intact.” This grizzly is doing an excellent job of flaying the salmon but I do not think that keeping the skin intact is important. The skin is often the first part of the salmon eaten not because it needs to be removed to get to the flesh but because of the layer of fat located directly beneath the skin. If the bears are selective in their eating because of the abundance of salmon or they are becoming full they will eat the skin, the brain and the roe (eggs) and leave the remainder of the salmon for the seagulls, bald eagles or other scavengers.