Beside not being the clearest photo it is interesting because it captures the meting of a mother grizzly with three cubs and a sub-adult male grizzly bear.

Coming from opposite directions it was the young male that was most surprised as the wind was at it’s back and he was not able to smell the mother. The mother had picked up on the males scent earlier and was not concerned. It was the male that retreated to the upper beach and walk around the family before moving along the beach. Most grizzlies go out of their way to avoid a mother with cubs. 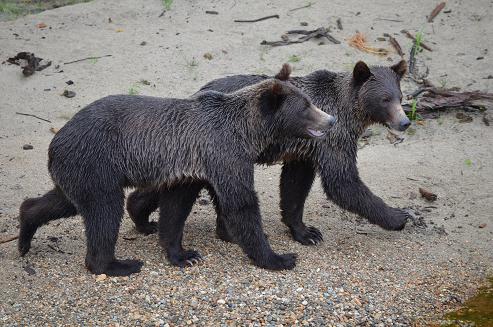 It is common to see sub-adult grizzly siblings together on the Grizzly Bear Lodge’s bear tours. Depending on food abundance, mother grizzlies may keep their yearlings a second (even a third) year, denning together again and breaking up in the third (or fourth) year. Alone and vulnerable, siblings will often stay together for some time after their mother abandons them, eating and sleeping side-by-side, and even denning together. The average breeding age for female grizzlies is 4.5 years. Males reach sexual maturity at roughly the same age as their female counterparts. Even though males are capable of breeding at three or four years of age, they rarely have the opportunity to do so because of intense competition from older, bigger males. These two bears spent most of the summer in the area of the Glendale River.