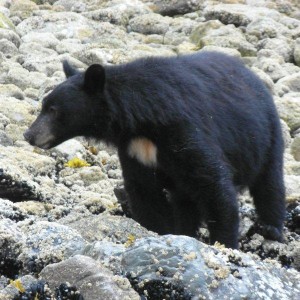 The picture that supports the speculation of scientists:“Most black bears are black with a light brown muzzle and often have a white V-shaped fur patch on their chest. The North American black bear Ursus americanus is the smallest and the most widespread bear species found in North America. Its ancestors are believed to have crossed into North America over the Bering Land Bridge.” (from http://www.bearsoftheworld.net)

“Asian black bears are medium-sized bears that inhabit parts of southeast Asia and the Russian Far East. Asian black bears have a patch of yellowish-white fur on their chest and a black body. They resemble American black bears in body shape and behavior. Asian black bears feed on a variety of plant materials including bamboo shoots, leaves, herbs, grasses, fruits and nuts.” ( from About.com Animals / Wildlife)

Every tour from the lodge is a black bear tour as they are most often seen along the shore at low tide turning over rocks in search of food. These bears do not have access to the salmon spawning rivers as they are under the protection of the grizzly bear.  For a grizzly a black bear would be food for several days. 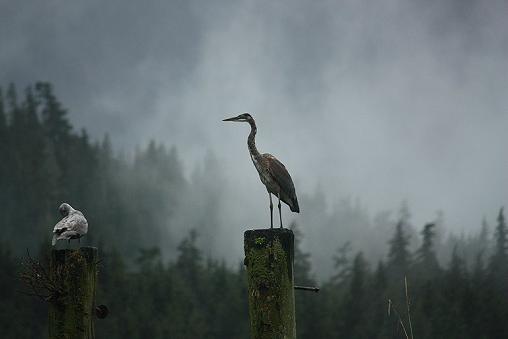 “Early morning from Grizzly Bear Lodge. We were in total awe of the beauty of the scenery and the silence – this place is just stunning.  The staff, the location, the food – everything was just perfect!
We captured this stunning photo of a Great Blue Heron just by chance as we stood on the jetty waiting for our boat to take us to the Bear viewing platform. The scenery in the early morning mist was just stunning.”
Thank you, Lynn for the compliment although we do try hard we cannot take credit for the scenery.