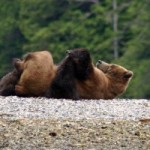 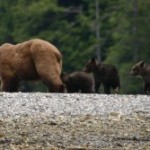 Click photo to enlarge and see ALL of the bear!

As the photo shows lunchtime is over and time to move along.  Triplets are a sign of a very healthy grizzly.  This was best explained by Bruce Auchly in Montana Outdoors  “When a pregnant bear goes into her den, she is only a little bit pregnant. After bears mate in late spring and early summer, a female’s eggs are fertilized but they do not implant in the uterus. By mid­summer the fertilized egg has developed into a multicelled blastocyst (an early stage embryo), but further growth is arrested. The embryo floats freely in the uterus until denning time, later in the fall.
This delayed implantation allows the female bear’s body to assess whether it has sufficient fat reserves to carry, give birth to, and nurse cubs through the sow’s long winter nap. If fat reserves are present, it’s all systems go. But if a bear can’t gain enough fat, the blastocyst won’t attach to the uterine wall, ensuring that a female in poor condition will not be further stressed by reproduction. Then the bear’s body absorbs the embryo, gaining a bit of nourishment.” 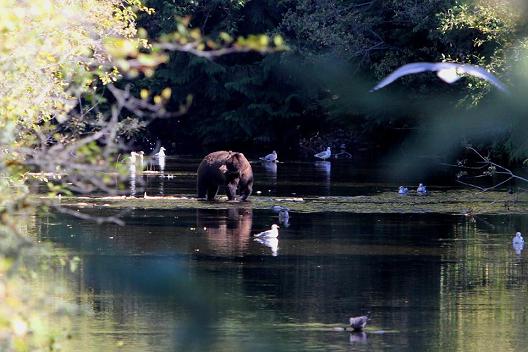 The spring and early summer grizzly bear tours from Grizzly Bear Lodge take place on Knight Inlet’s Glendale River and in the river estuary. After an hour and fifteen minute boat ride up the inlet we transfer to a sixteen foot skiff which permits us to travel in the shallow water of the estuary and up the river at lower tides. As this photo shows the first sighting of a grizzly is normally from a distance and as the tide rises we are able to move closer. The next two posting of the pictures provided by Craig and Pat Brown from USA will show the improved viewing as the tide rises.