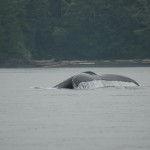 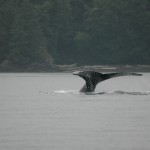 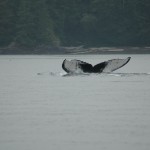 In 2008 the number of humpback whales in the North Pacific was estimated at just less than 20,000. This number is a far cry from the scant 1,400 humpback whales estimated in the North Pacific Ocean at the end of commercial whaling in 1966. Researchers are able to identify humpback whales by photographing and cataloguing pictures of the animals’ tail, or fluke, because the pigmentation patterns on the fluke act like a fingerprint and are unique to each animal. This sequence of photographs by Marc and Solange from France are exceptional in that they show three photos of the same whale diving (note the beach behind the tail) as well as the underside that would be used for identification.  These photos were taken in Blackfish Sound near Telegraph Cove BC on Vancouver Island.

An excellent photo of the top of a humpback whales fluke. It clearly shows the scares left by barnacles as well as hole from an old injury. The whale watching tours from Grizzly Bear Lodge has viewed many more humpback whales this summer than in previous years. Viewing each year has improved from an average of four or five whale’s five years ago to twelve to fourteen whales this past summer. The abundance of herring (humpbacks main food) in the area men the whales are spending the summer s in our viewing area rather than traveling to their normal feeding grounds in Alaska.