Grizzly bears that fish in the holding pool next to Grizzly Bear Lodges viewing stands on British Columbia’s Glendale River normally take the salmon to bank to eat because of the deep water in the centre of the pool. If you look closely there is another salmon by its front paw and several more in the water.  Grizzlies fishing further up the channel often wound salmon, which later die and drift into the holding pool making it in ideal fishing area for the bears, which want to conserve energy. Bears are able to reach into the water and pull up salmon with little effort while grizzlies on the other side of the stand actually work for their catch.

How close is too close? 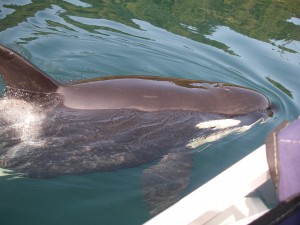 There is a marine regulation requiring boats to stay 100 meters from orca and this is enforced by Strait Watch and the Warden.  This day we were lucky to be sitting quietly as the orca were passing in shore of our boat when a female turned and left the pod she was traveling with and swam around and beneath our boat. The lucky part was that Strait Watch was sitting about fifty meters from us so we had the best witness that we were not approaching the orca.  Were we talking with them after the encounter and both agreed that the orca was likely fishing and approached our boat out of curiosity. The reason is not important the photos are what counts.  Definitely a bonus day.