Whale watching safaris from the lodge this summer saw allot of activity from the humpback whales. Most days there were more than a dozen whales in the area of Bold Head on Blackfish Sound which is adjacent to Johnstone Strait and Vancouver Island on BC’s coast. There were two families of mother and calf in the area and the calves were very active. In this photo the calf was quite close and spent time throwing it’s back half of its body sideways out of the water. It would come up with it’s upper body part way out of the water and then throw it’s back half up and to the side.  This was a repeat performance going on for the better part of five minutes with a rest and then trying again.  From my searching scientists aren’t sure if this breaching behaviour serves some purpose, such as cleaning pests from the whale’s skin, or whether whales simply do it for fun. 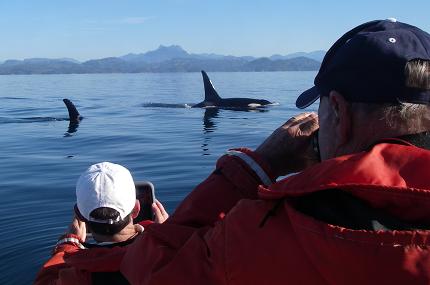 A day whale watching from Grizzly Bear Lodge does not mean that you will be in “close” proximity to orca or humpback whales all the time.  There is, however an excellent chance that sometime during the trip you will be close enough to get those “bucket list” pictures. A good photo is the result of patience and position. My job as a guide is to get you into the best position and as a guest you just need the patience.