This photo taken an hour earlier than yesterday’s post shows a humpback whale fluking or lobtailing. Lobtailing is the act of a whale lifting its fluke out of the water and then bringing it down onto the surface of the water hard and fast in order to make a loud slap. Large whales tend to lobtail by positioning themselves vertically downwards into the water and then slapping the surface by bending the tail stock.  They are likely to slap several times in a single session. The sound of a lobtail can be heard underwater several hundred metres from the site of a slap. This has led to speculation amongst scientists that lobtailing is, like breaching, a form of non-vocal communication. Also some suggest that lobtailing in humpback whales is a means of foraging. The hypothesis is that the loud noise causes herring to become frightened, thus tightening their school together, making it easier for the humpback to feed on them. 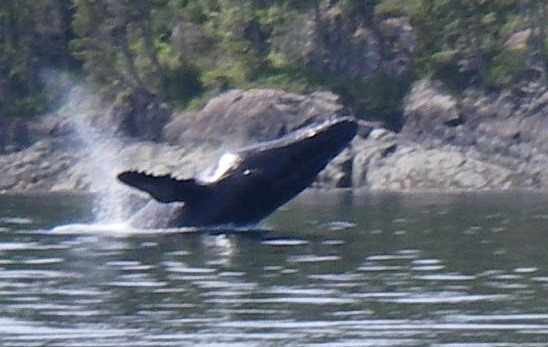 Many reasons have been suggested for breaching. Whales are more likely to breach when they are in groups, suggesting social reasons, such as an assertion of dominance, courting or warning of danger. It is also possible that the loud “smack” upon re-entering is useful for stunning or scaring prey. Others suggest that a breach allow the whale to breathe in air that is not close to the surface, which may aid breathing in rough seas. Another widely accepted possible reason is to dislodge parasites from the skin. But to tell truth I do not think the guests I have in the boat care about the reason they are just happy to see breaching whales.