The website “eHow” provides the best explanation of “How Do Killer Whales Sleep?”“Like dolphins, killer whales are voluntary breathers, meaning their breathing is not automatic like it is for humans. Instead, they must consciously rise to the surface and breathe. This makes sleeping for them much different than it is for other animals. Studies on dolphins and beluga whales have shown that they sleep by shutting down only one hemisphere of the brain at a time, thereby allowing them to both rest and have control over their breathing. It is thought that killer whales, being closely related to dolphins, do the same thing. Resting behaviors differ depending on whether the killer whale is by itself or part of a pod. If it is alone, it will rest by staying near the surface, with dorsal fin, blowhole and part of the head out of the water. Usually this only lasts for a few minutes at a time, but there have been reports of killer whales resting this way for up to eight hours.Killer whales in pods sleep differently. The pod will form a tight circle, and their breathing and movements will synchronize. They take several breaths at the surface, and then submerge for a period of time before surfacing again. The time spent submerged increases as the “sleep” becomes deeper, and they may take up to ten breaths near the surface before submerging for as long as ten minutes. Pods resting like this will avoid boats and contact with other animals during this process. It is thought that this kind of group resting may strengthen the animals’ bond and cohesiveness as a unit.” 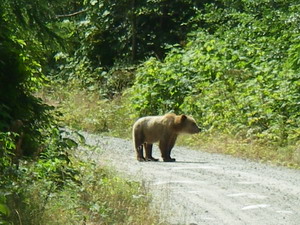 If you choose to stay the extra night at our lodge the extra day is spent at a “wild” river on a wilderness tour.  We cross Knight Inlet pass through Thompson Sound to the Kakweikan River and spend a day with Trapper Rick.  The scenery on BC’s mainland in breathtaking and the wildlife viewing provides a reasonable chance of grizzly bear sightings.  Bears are viewed below the falls at Rick’s cabin or on the road to the cabin.  In this case it was on the road and we wait until the bear decides to let us pass.  Having guided for the past twelve summer I can say that seeing a grizzly bear at Rick’s is a different sensation than see one from a viewing stand on Knight Inlet’s Glendale River.