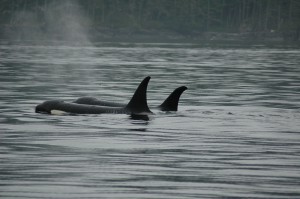 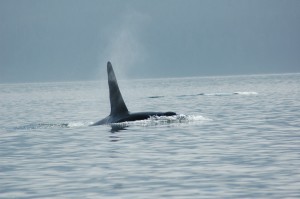 The resident orcas arrive in the area adjacent to the East Coast of Vancouver Island in the Johnstone Strait normally by the start of July and remain in the area through October.  The residents are the salmon eating orca. The transient orca, mammal eaters, is in the are all year but spend much of their time is the inlets away from much of the marine traffic. R. W. Baird says “Membership in each (group) begins at birth and cultural bonds and identity continue throughout life. Residents and transients differ in diet, vocal traditions, habitat range, morphology (shape of dorsal fin, etc.), pigmentation patterns (such as the eye patch) and genetically. Though they cross paths routinely throughout the inland waters of BC and Washington State, the two forms are becoming, or by some accounts are already, separate species. DNA work indicates that they have not interbred for at minimum one hundred thousand years.” This great photos provided by Marc and Solange Edouard from France are of two female resident orcas and a lone male. 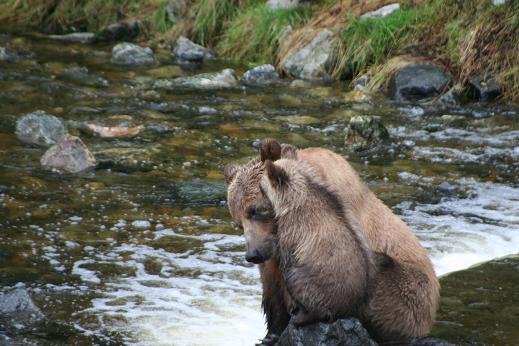 Most grizzlies’ first year cubs prefer not to be in the water. When they first come to the beach in the spring and are required to swim along some to the steep bank beaches the mother are forced to abandoned them to force them into the water. After August 24th the viewing activity moves up the river after the salmon arrive. In this photo the cub made it to the rock near the fishing hole but choose a dry perch. As long as mom came by to check on a regular basis all was good.