Resident orca spend their summers in the area between Vancouver Island and the BC mainland and are likely to be found near Robson Bight which is part of the Johnstone Strait. A good orca photo will try to capture the bulk of the orca out of the water with their eye patch showing. Success! Wildlife normally viewed on a “whale watching tour” included orca, humpback whales, stellar sealions, seals, eagles, a variety of ducks and frequently black bears. Photos by 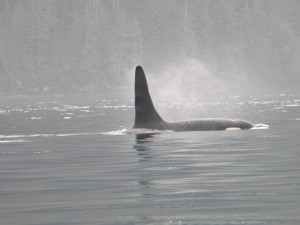 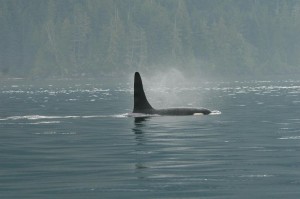 The day trip to watching grizzly bears, after August 24th, is at viewing stands on Knight Inlet’s Glendale River. The viewing stands are near a man made salmon spawning channel, which attracts the bears to feed because of the abundance of salmon. The grizzly bears have become accustomed to our presence and the majority of the time we are ignored. James O’Donoghue of Great Britain seems to have captured the exception on film. This bear swimming below the viewing stands is definitely making eye contact which may be because it is about ten meters (thirty feet) from the platform.