Great photo of a young bald eagle. Young because eagles start to get their whites heads in their third year and are normally fully white by the end of the fifth year. Regarding the yellow beak I found an interesting story on line from Senior Naturalist Dave Erler that is worth reading:

“Not long ago a Squam Lakes Natural Science Center trail visitor observed the immature and adult Bald Eagles housed at the Raptor Exhibit and asked me a great question. Why does the adult Bald Eagle have a yellow beak? I pondered for a moment before responding. I recollected from the ornithology course I took in college that the outer covering of a bird’s beak was composed of keratin, which is similar to keratin in mammal nails or claws, reptile scales, and bird feathers. I also explained that the yellow color in bird beaks, ceres (the fleshy portion at the base of a raptor’s beak), and feet are caused by pigments called carotenoids. After sharing this information, I explained that when I first came to work at the Science Center some three decades ago, most of the raptors in our collection had very dull color in their ceres and feet. This prompted me to contact a veterinarian I knew who worked with raptors. The vet explained to me that the carotenoids in bird beaks have a slightly different composition of proteins and glycine than is found in other animals. The yellow color is influenced by both diet and hormones. The vet suspected the dull color was the result of a vitamin deficiency, possibly vitamin E. On the vet’s recommendation we began to use a vitamin supplement formulated for hawks and falcons. After a few months, there was a marked improvement of the birds’ ceres and feet, indicated by a brighter yellow color.
After sharing all this information with this gentleman, I could tell by his glassed-over eyes that I had missed the intention of his question. So I asked him if his question was really, “What is the function of having a yellow beak?”  He nodded yes. Realizing I had already bored him senseless, I simply stated it probably indicates to other eagles that the individual is fully mature and healthy, important factors if you are trying attract a mate and hold a territory. That answer was sufficient and he wandered off leaving me to wonder why I don’t have a yellow beak.”

A large Grizzly Bear on a tour from lodge 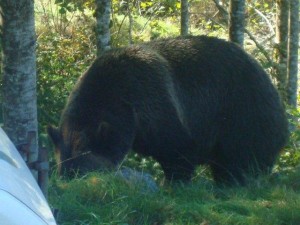 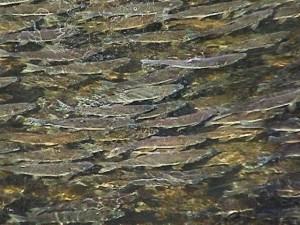 The morning grizzly bear viewing tour up Knight Inlet is always more memorable after an encounter with a Big grizzly. Guests like to compare the size of the bears they view on their day trips however a truly big grizzly bear will tend to keep other bears away until they have had a good feed. So maybe size is not a good thing. Is this one eating grass it is possible even though this picture was taken in September bears are still eating grass and berries along with salmon. Salmon along the BC coast and notably Knight Inlet arrive at the rivers in mid August and remain until late October.Bruce comments “Although prior to our visit we had read about the thousands of salmon that congregated up river at the end of “The Salmon Run”, the wall-to-wall density of the fish was an amazing sight.”Photos by Bruce & Carole Cripps 8-11