The small falls below Rick’s cabin for some reason created in the Department of Fisheries a need for a fish ladder. The fish had been making it over the falls since fish started going over falls too spawn so a ladder was not really needed but it did permit the weaker fish to make it further up the river and thereby weaken the genetic strain of these pink salmon. (Personal comment.) The orange support beams in the first photo go around the corner in the second photo to show the ladder by passing the falls. A trail from the cabin passes along the edge of the ladder. The third complete box up from the lower right corner is the one the grizzly bears climb into to grab salmon. It is like the fishponds at a kid’s school fair dip down and back up with a salmon in minutes. It is possible to be at the top of the trail and watch the bears disappear into the “salmon pen”. 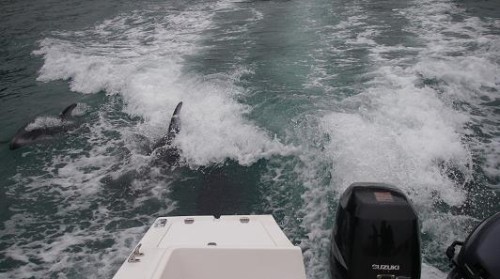 I have tried over the years to parallel a pod of dolphins but they have their own idea of fun. Their plan is to either ride our bow wave of stick their nose right into the prop wash of the motor. The blackness in the water to the right of the dorsal fin is a third dolphin coming in for a check on our prop. I have developed my own idea (no scientific proof) why dolphins like the prop wash and it is the same reason why people like the water jets in a hot tub – they feel good.