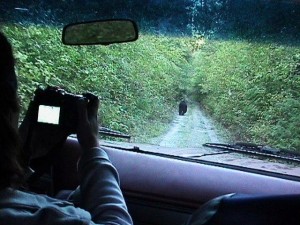 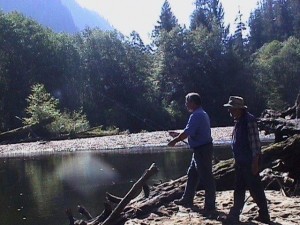 On the extra day in camp we cross Knight Inlet through Thompson Sound to the Kakweikan River  and spend a day with Trapper Rick. This river is located on the BC mainland and we travel by road to Rick’s cabin. On the way to Rick’s we occasionally view Grizzly Bears on the road. We followed this grizzly bear down the road for five or six minutes and he stayed on the road until we reached the river. He made no attempt to head for the bush rather we were ignored until he got to HIS destination which also happened to be ours. If time permits and you have the interest river fishing can be enjoyed and in August catching is almost a sure thing. Photos byBruce & Carole Cripps 9-11 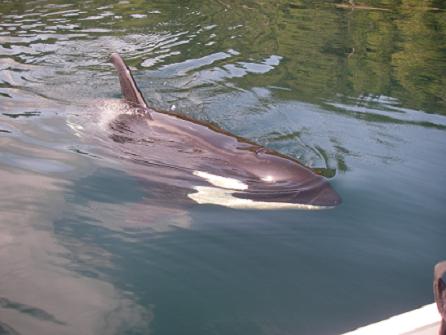 Yes that is the edge of the boat in the lower right corner of the photograph. And this is another curious mammal an orca or killer whale. The whale watching guidelines require that we stay 100 meters (yards) from the orca and we were until this female came over to the boat and swam around and under us several times. We were fortunate that the warden (whale watching police that enforces the guidelines) was not far from our boat at the time of the occurrence and had not just arrived to see it happen. We talked with the warden after and both agree that we must have stopped over a school of salmon and this orca was fishing.