Today’s blog and pictures tie in with yesterdays. On the ground behind the last guest heading down to the falls is a dark patch of what look like dug up ground which is a mixture of scratching and bear scat shown in today’s first photo. Directly behind but hard to see is a green garden hose the second of today’s photos. Looking closely at the garden hose it is noticeable that it has been well chewed. The interesting thing is that neither of these was present the day before. On the trip the previous day we were on the cabin deck when two sub-adult grizzlies came up the trail from the falls and were not pleased that we were there as they wanted to pass on the road by the cabin and we made it uncomfortable for them. Rick had been having trouble with these two for several days and said the fresh bear scat and chewed garden hose meant that they were not happy with him either.

“Caught in the act” by a Grizzly Bear 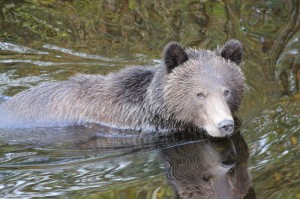 Just when you think the grizzly bears you are viewing do not really know that you are there you get one that looks you right in the eye when caught taking a photo.  To put a human touch it would be “A little privacy if you don’t mind.”  The bears on the lodge’s tour up Knight Inlet tend to ignore our intrusion into their life.  In the spring and summer, while they are feeding on the beach they only acknowledge our presence if we get to close.  In the fall in the viewing stands on the Glendale River sudden movement, load noises or a cameras flash left on will get their attention. For the most part the grizzly is aware but chooses to ignore. Guest James O’Donoghue from the UK provided this photo.