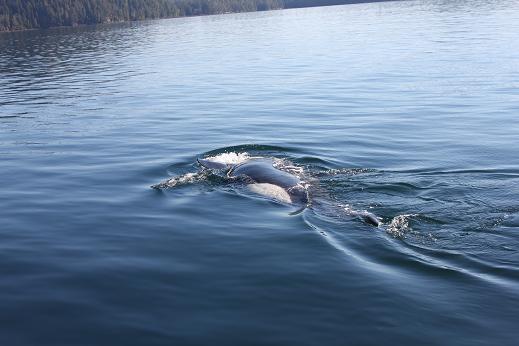 These two orca / killer whales passed under our boat and surfaced a few meters (yards) away. Explanation: looking at the photo their appears to be a dorsal fin at the top of the photo but it cannot be from the main orca because that would mean it was coming out of it’s belly. The belly of an orca is white and it is possible to see the tip of the tail at the end of the photo. So it could be one orca diving over the back of another or the dorsal fin could be the tail of another orca and the second one is following too close. Either way it was close.

The day trip to watching grizzly bears, after August 24th, is at viewing stands on Knight Inlet’s Glendale River. The viewing stands are near a man made salmon spawning channel, which attracts the bears to feed because of the abundance of salmon. The grizzly bears have become accustomed to our presence and the majority of the time we are ignored. James O’Donoghue of Great Britain seems to have captured the exception on film. This bear swimming below the viewing stands is definitely making eye contact which may be because it is about ten meters (thirty feet) from the platform.