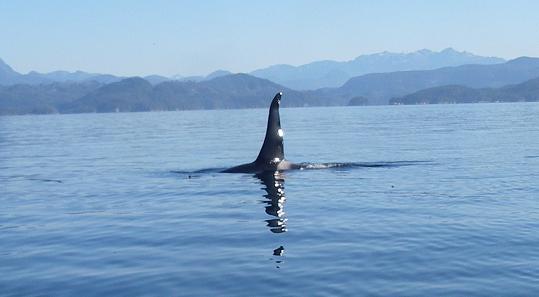 A male killer whale’s dorsal fin can grow to as much as 6 feet tall. Despite the fact that the dorsal fin is very straight, it is not supported by bone, but a fibrous connective tissue called collagen. This male is a member of the “A” Clan. The northern resident population numbers approximately 250 whales made up of three clans – A, G, R Clan. Resident (fish eaters) killer whale pods are MATRIARCHAL, meaning that sons and daughters stay with their mother throughout their lives, even after they have offspring of their own. The bonds between siblings usually remain strong even after the mother has died. A matriarch and all of her descendents are referred to as a MATRILINE. A POD is a larger unit that is made up of one or more matrilines that travel together at least half the time and that probably stem from a deceased matriarch. A CLAN is a group of pods that share similar calls or dialects. 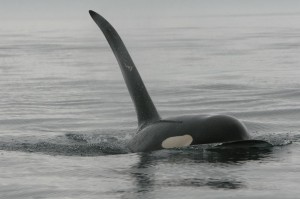 Some photos capture the majesty of the orca. This is a large male coming for a closer look. Often the best approach to viewing marine life in the area between Vancouver Island and the mainland coast is to sit quietly in the boat with engine turned off and allow visitors approach. Lunchtime on a whale watching tour involves drifting and waiting. Photos by