Orca, killer whales or blackfish are all the same and the residents return by late June most years. Our whale watching safaris are in the area of Johnstone Strait between Vancouver Island and the British Columbia mainland. This photo of a male orca shows a mature dorsal fin.  Following are some interesting fact about dorsal fins taken from www.seaworld.org/infobooks/killerwhale.
1.  Like the flukes, the dorsal fin is made of dense, fibrous connective tissue, with no bones.
2.  The dorsal fin acts as a keel.  The dorsal fin probably helps stabilize a killer whale as it swims at high speeds but is not essential to a whale’s stability.
3.  The dorsal fins of male killer whales are the tallest of any cetacean in the world, growing up to 1.8 m (6 ft.).  Female dorsal fins are smaller at about 0.9 to 1.2 m (3-4 ft.) and may be slightly curved back.
4.  For male killer whales, dorsal fin growth is thought to be a secondary sexual characteristic as peak growth of the fin coincides approximately with the onset of sexual maturity.
5.  Because of the huge diversity of killer whale dorsal fins and the adjacent saddle patch, researchers take pictures of these fins to identify individuals and their pods, much like fingerprints are taken to identify humans. 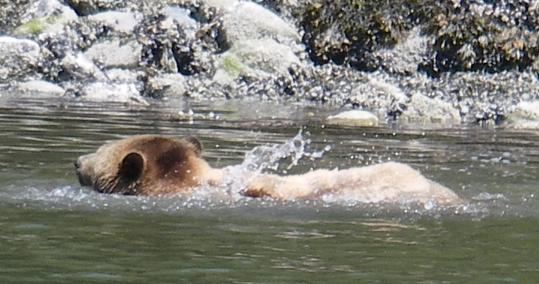 Spring grizzly bear tours from the Lodge are looking for bears along the shore of Knight Inlet but mostly in bay and estuary of the Glendale River. The grizzlies come to the shore for the protein rich sedge grass and to turn over rocks for the crabs, clams, barnacles, amphipods and other tiny invertebrates. The male grizzlies come in late May and June, as this is the mating season and also the reason that this female is in the water. A male grizzly kept moving along the shore as this female stayed in the water for close to an hour until he moved back up the beach. The August 1st posting shows this determined male.