Stellar Sea Lions are often seen on out tours and are common in large numbers from late August until the end of our season.  Stellar Sea Lions are creatures of habit and will use the same rocks to haul out on year after year.  Stellar Sea Lions do not migrate, but they do move throughout the season from resting, feeding and mating(rookery) areas.  They eat a variety of fish, but can often be seen feeding on migrating salmon that pass through Blackfish Sound, where we spend a lot of time whale watching. 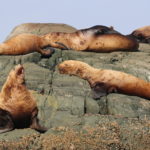 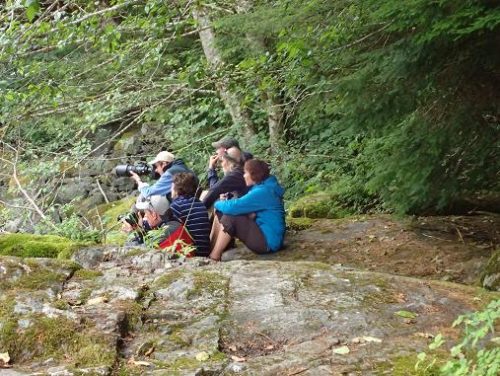 On the extra day in camp we spend the day on a river located on the BC mainland.After crossing Knight Inlet we travel through Thompson Sound to the Kakweikan River and spend the day with Trapper Rick. We travel via old overgrown logging roads to Rick’s cabin which is about two kilometres (miles) from the mouth of the river. In this photo Rick and four guests are sitting near the falls which is a natural fishing area for grizzlies. Not hard to find Rick in this photo and tomorrow’s post will show what has their interest….