Bears generally live solitary lives, but can be found together in the Glendale River estuary during mating season. The average breeding age for female grizzlies is 4.5 years. Males reach sexual maturity at roughly the same age as their female counterparts. Even though males are capable of breeding at three or four years of age, they rarely have the opportunity to do so because of intense competition from older, bigger males. This photo shows the size and thus the age difference between the two bears.  The biggest bears in the population tend to be the most prolific breeders. Not only are male bears promiscuous, but females often have more than one sexual partner thus there can be quite a difference in the colouring of sibling cubs.

The implantation of the fertilized eggs – called blastocysts – is delayed until the start of denning season. If the female does not attain sufficient body fat or weight during the summer and fall, the embryos will not attach to the uterine wall and subsequently develop into little bears. 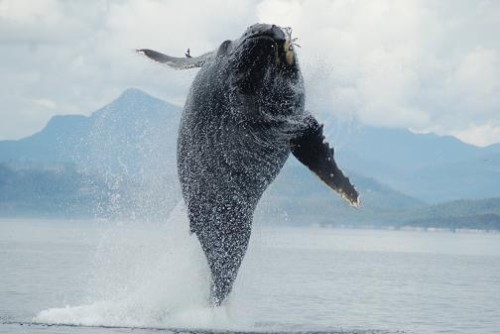 The interesting aspect of this photo is that it was caught in a photo. A breaching humpback whale is reasonably common but catching it on film is not. Humpback activities such as tail lobbing (slapping), pectoral fin slapping, and lunge feeding are easier to photograph as they are repeated and therefore predictable. A breach is without warning and seldom repeated.