This is the case where the grizzly is doing the spotting. We were in a skiff in the Glendale River estuary on a morning grizzly bear tour from the lodge. The tide was starting to rise so we were just starting to move up the river when this large male grizzly walked out of the sedge grass toward our boat. As the photo shows its head was up and it was on a mission we were just hopping we were not the mission. It passed or skiff about 30 meters (yards) away and paid us little interest it was then we realized it must be smelling the small yacht in the bay cooking bacon for breakfast. The wind must have shifted because it soon returned to eating the sedge grass and rolling rocks. 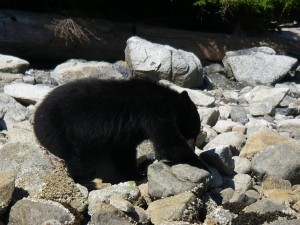 This black bear was viewed on one of the evening tours that happen on your arrival day. A local wildlife boat trip is taken to familiarize guest with boats and guides as well as finding black bear, bald eagles, harbour seals etc. This bear is looking for it’s evening meal located under rocks. This inter-tidal zone “food” is high in protein and is made up of crab, clams, barnacles, amphipods and other tiny invertebrates. The “beach food” is important because plant food is relatively scarce during spring and bears will continue to loose weight until well into June. Yes it is a large rock and the bear did turn it over with a little effort.