Orcas (killer whales) can be identified on an individual basis due to natural markings and differences in fin shape. Dorsal fins that vary in shape and size often have unique nicks or scars. The saddle patch behind the dorsal fin also varies from in shape, size, color and scarring. This male orca is a member of the northern resident community, which are most often seen during the summer months in the area of western Johnstone Strait and Queen Charlotte Strait, off northeastern Vancouver Island. This orca watching area adjacent to Grizzly Bear Lodge is also the home of humpback whales, which along with the orca are normally viewed on a daily basis.

“Two For One” Bald Eagles 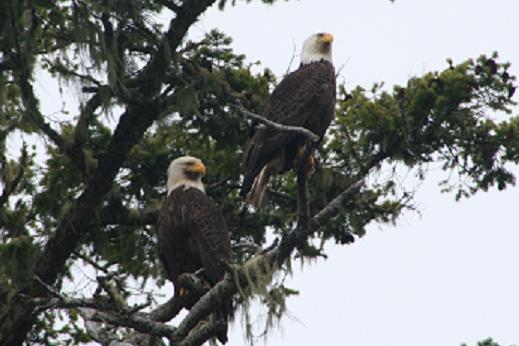 Bald eagles are sexually mature at four or five years of age and this is indicated by the fact they now have their white heads. When they are old enough to breed, they often return to the area where they were born. It is thought that bald eagles mate for life and thus when we are running along the shore on tours from Grizzly Bear Lodge if you see one eagle the other will be close. It is not very common to have them in the same tree as it narrows the area for fishing but is does give one a chance to determine which is the female. The female is the larger of a mated pair in this case I think the higher of the two but unless they are side by side on a branch it is hard to tell.