The common loon has a unique eerie call that echo across lakes and bays of the northern British Columbia coast. Once you have heard this call it will never be forgotten. In the summer adults are regally patterned in black and white. The Canadian one dollar coin is called a “loony” because of the engraving of a loon on the coin. Belted Kingfishers spend much of their time perched alone along the ocean shore searching for small fish. These ragged-crested birds are a powdery blue-gray; males have one blue band across the white breast, while females have a blue and a chestnut band. The kingfishers are common around the lodge but very hard to obtain a photo of one, as they tend to fly quickly along shorelines giving loud rattling calls. The “common” loon is less common when one wants a photo. Loons are in most of the small bays we pass through but last summer it took two guides five days for a guest to get a good photo of a loon which was an important part of his “bucket list” for his trip to the lodge. 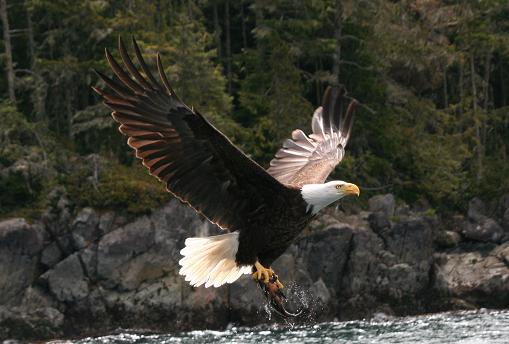 Whether you are on the lodge’s front deck, on a grizzly bear trip, whale watching in Johnstone Straits, or on your way to Trapper Rick’s you will see bald eagles. The likely hood of watching them catch a fish increases when whale watching because there is an abundance of herring in the area and therefore more fish to catch. However this eagle picked up a rock cod which is a bottom fish and that means that it was caught and thrown to the eagle to get the photo.