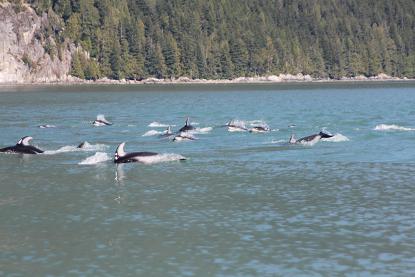 A picture from the grizzly bear viewing stands used by Grizzly Bear Lodge. These stands are located on the Glendale River that empties into Knight Inlet BC about 40 km (26miles) from our lodge. Is this bear dead? No just taking advantage of the cool sand in the shade along the river. Shows how concerned and fearful the grizzlies are of the activity in and around the viewing platform.  The bears have walked beneath the stands, will fish for salmon in the pool beside the viewing platform and even take a nap in the close by shade.