The pacific white-sided dolphins are seen quite often on both the grizzly bear tours and the whale watching safari. These dolphins are present in First Nation’s middens dating back 2,000 years, but they were rare in B.C. during the 19th and 20th centuries. Starting in the 1980’s, Pacific white-sided dolphins started to become more abundant in inshore waters and inlets along the B.C. coast. It’s possible that their long absence was related to a change in ocean temperatures and a shift in their prey distribution. Dolphins travel in groups throughout their lives. We usually encountered groups of 50 to several 100 animals, although some groups have been seen with 1,000 or more individuals in our viewing area. As the photo demonstrates these dolphins are energetic and quite active and are frequently seen leaping, belly flopping, and somersaulting. They are strong, fast swimmers and enthusiastic bow riders, often staying with moving vessels for extended periods. 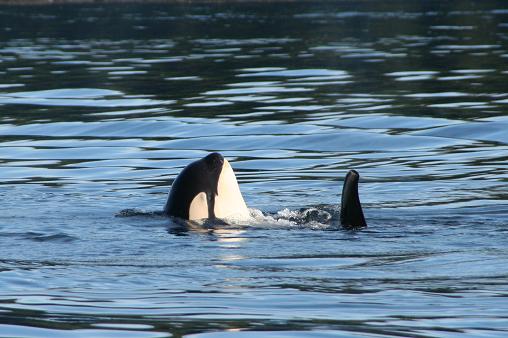 In a good spyhop the orca / killer whale has about half of it’s body out of the water. This is more of an orca backstroke where it was passing the boat and rolled over and stuck it’s head out of the water. The description of what is happening is not important because the picture is interesting and unique.