Steller sea lions often “haul out” on the rocks near Stubs Island located not far from Telegraph Cove on Vancouver Island.  They pass through this area in the spring and fall traveling between California and Alaska.  The sea lion numbers are on a decline along the West Coast of North America and a branding identification program has been underway for about fifteen years. “The two sites chosen to mark Steller pups were Pyramid Rock at Rogue Reef, Oregon and Southwest Seal Rock at St. George Reef in northern California. These sites are the largest Steller sea lion rookeries in the lower forty eight states. Steller sea lion pups were branded along the left flank. Sea lions branded at Rogue Reef, Oregon have a letter R following the numbered digit (i.e. 25R). Quote from Patrick J. Gearin
NOAA, AFSC, National  marine Mammal Laboratory” Several of these branded sea lions are seen each summer and sightings are reported. 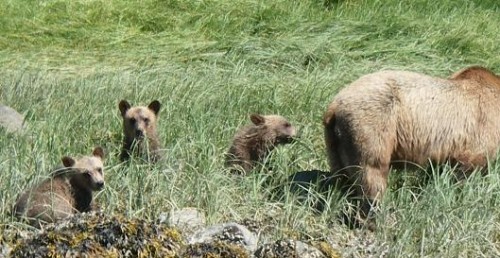 The cubs are up and hungry but it is sedge grass for lunch. Sedge grass stalks are spiky, wide and stiff but the sedge grass is up to 25% protein, and this is the reason why grizzly bears prefer eating it to other grasses.  In the spring a grizzly bears diets consist of approximately 70% of sedge grass to replenish their lack of proteins during hibernation. Diets shift with the seasons, as summer approaches the berries start to replace the sedge grass and fall brings the salmon into the Glendale River.