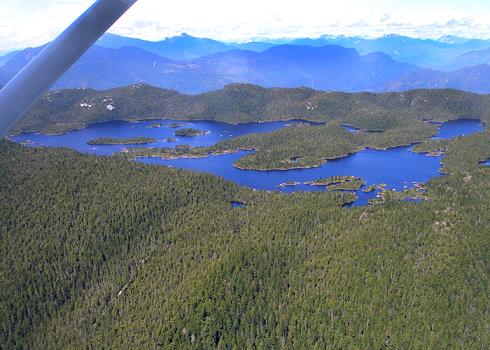 The Coast Mountains in the background make for a memorable flight to the Lodge from Campbell River. For many guests it is their first flight in a small plane. For some it is a “white knuckle” flight while others could do it every day. Keep a camera handy, as you will be flying for about forty-five minutes over nothing but a beautiful landscape that will give you some idea of the vastness of “Beautiful British Columbia”. 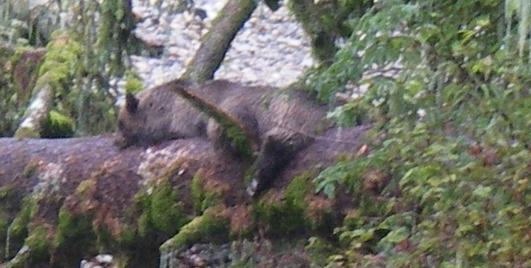 About 35 meters (yards) from the viewing platform we use after August 24th a tree has fallen across a small channel in the river. This tree has become a pathway for the grizzly bears that do not want to get their feet wet. That means bear cubs because they tend to avoid the water if they can. They use the log to watch their mother as she fishes in the river below and if she is too slow in catching a salmon it is a good place to rest.

The first trip of the season and what a trip! Angus looked after us so well during the days and always found the best places to view the wildlife; Cathy tried her hardest to make us gain weight- many thanks- while John and Clint kept everything ticking all over really well. Many Many thanks for looking after us! Bye Bye Emily J
Jill & Eric, Worcester UK

After breakfast we take you to our wild river, the Kakweiken, by safari boat. View Black Bear, Seals, and perhaps a school of playing White-Sided Dolphins on the way. Meet one of our river guides, Trapper Rick or his assistant, and ride the Trapper’s “Grizzly Truck” to the spawning area of the river. View grizzly and Black Bears and Bald Eagles while watching the schools of salmon preparing for spawning. If you wish, fish off the bank for the salmon or trout.

Enjoy your picnic lunch at the trapper’s cabin overlooking the waterfalls – a good time to spot a Grizzly Bear feeding on the jumping salmon. In the truck and back to the boat and enjoy your trip home to the lodge before catching your seaplane back to Campbell River for your final night.

In 2016 we enjoyed another great season with excellent Grizzly Bear and whale sightings in both Knight Inlet and Johnstone Strait.

Bear viewing was great right from the start of our season in late May until the end in mid October.  In the spring we were able to view the bears feeding on sedge grass in the estuary and various marine creatures such as shore crab, mussels and barnacles.  “Bella” is a long time resident female grizzly bear in the Glendale Cove area of Knight Inlet.  Last year we saw several male bears showing interest and low and behold this spring she emerged with three young cubs of the year.  Lenore was also out with her yearling cub and many other bears greeted us on the shores and lower river this spring.  The salmon were very early this year with pink salmon entering the river by mid July.  Some of our July guests were lucky to view bears feeding on salmon ahead of schedule.  We began viewing the bears from the viewing stands on August 25 and there were an incredible number of bears feeding on the pink salmon.  The viewing platforms remained strong right through the season.  We had more rain this season then we have had in a few years.  For the salmon this is a good thing as the river was in great shape for the spawning fish which should make for good salmon returns in the future.

On the Kakweiken River trip we had some great Grizzly Bear viewing, particularly from late July through August.  The salmon were early here as well and so were the bears.  Pink numbers were so-so, but there was a huge return of Chum Salmon which are much bigger.  Emily was spotted often with her new cub as well as Burtrum, Andy, Cathy, Roy and a few others.  There was some excellent black bear viewing on the way to the river when the tide was out and frequent humpback whale sightings too.

It was also a great year for marine mammals in both Knight Inlet and Johnstone Strait. The resident (fish eating) Orca showed up in early July and were around until early October feasting on salmon.  The transient (mammal feeding orca) were around quite a bit this year and we were lucky to see them hunting both harbour seals and white sided dolphins on several occasions . The Humpback Whales were amazing once again and were very abundant throughout the entire season.  As usual there were large numbers of humpbacks in Johnstone Strait and Blackfish Sound.  Last year saw a huge increase of humpbacks in Knight Inlet and this year there were even more.  One of the nice things this season was to see a lot of whales returning to the Inlet with new calves.  These young whales will likely return to these same waters year after year.  On several occasions we hade Humpbacks right in front of the lodge.   In addition White Sided Dolphins, Stellar Sea Lions and Porpoise were common sightings. For the avid birders there was plenty to view as well. Bald Eagle, Belted Kingfisher, Marbled Murrelets, Rhinoceros Auklets, Pigeon Guillemots, Storm Petrels, Surf Scoters, and Osprey to name a few.

Our guides and cook (Glen, Cam and Madeline) will all be back again in 2017.   After many years of service George will be retiring to spend time with his grandkids.  We thank him for his many years of guiding and memorable experiences.  Joe will also be returning, helping out behind the scenes to ensure that everything runs smoothly.  We look forward to another great season and hopefully we will see many of you in the coming season. Angus. 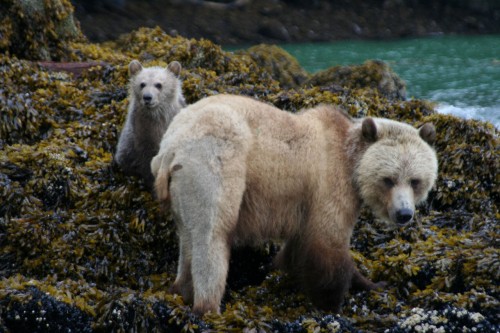 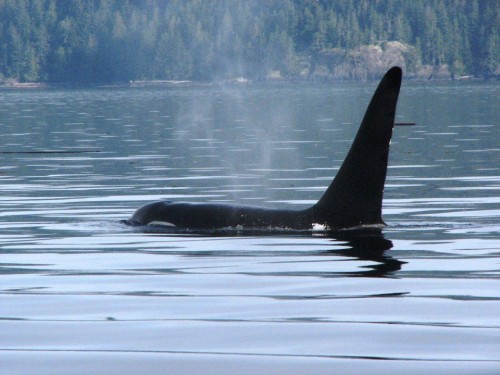 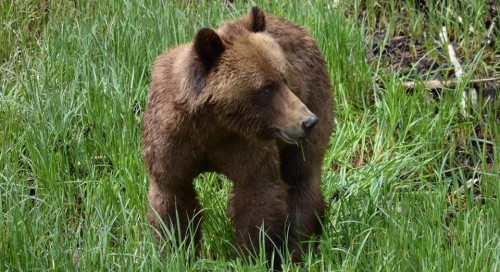 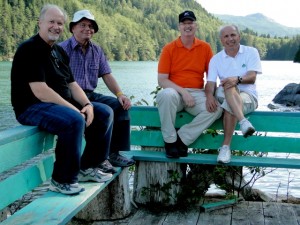 This is the story of four great guys, “the team consisting of the 4 Austrians Ingo, Sigurd, Walter and Heinz”. They say it best in their own words: “Please find below as required some fotos from our stay in your lodge in August this year. It gave us great moments and unique memories of a fantastic fauna in overwhelming nature.I hope you can use it in your website and show it to guests who are interested what their stay in the lodge would be all about. We appreciated very much the whole setup, means the lodge, the trips, the food and all the care you and your team provided for us.All in all it was a very successful choice to book your program and we can only highly recommend it to all who love to explore nature and stay in a lodge which is very small (only 8 guests at a time) and allows therefore very personal but professional care.Thanks again for everything and best regards to everybody there.The team consisting of the 4 Austrians Ingo, Sigurd, Walter and Heinz”